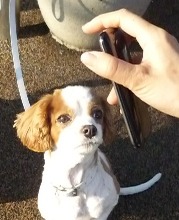 A 2002 Ig Nobel Peace Prize-winning device is coming to the iPhone and to Twitter. Crunchgear has a perfect headline and a succinct report:

Bowlingual: iPhone app translates what your dog barks, posts it to Twitter

Do you remember the Bowlingual, the portable dog language translator that was released in Japan last year? The basic concept behind the $250 device (which people living outside Japan can get here) will soon be used for an iPhone app that translates what a dog “says” into human language and emoticons in real-time. Japanese toy giant Takara Tomy markets the device as a gag product but also stresses its scientific component (it was jointly developed with an acoustics research laboratory and a veterinarian), meaning we’re in for a treat with the iPhone app that’s scheduled for release this summer [JP]. [The video here shows the old-style device.]The developer, Tokyo-based Index, a (listed) mobile contents provider, will release a Japanese version fist, followed by the English app in mid-August…

BONUS: This cover photo from an issue of the Annals of Improbable Research shows Masahiko Kajita, a co-inventor of Bow Lingual, when he returned to the Ig Nobel Prize ceremony in 2003 to take another bow from a delighted audience: