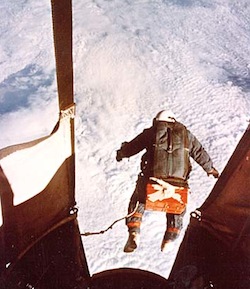 Austrian daredevil Felix Baumgartner officially announced that sometime this year, he intends to jump from a balloon at a height of nearly 23 miles, breaking the 50-year-old world record for the highest parachute jump held by retired U.S. Air Force pilot Joe Kittinger. Kittinger is the Stratos mission’s capcom (short for capsule communicator), which means that he will be the voice in Baumgartner’s helmet.