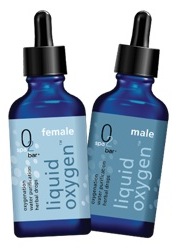 My occasionally-stupid husband was having one of his occasional stupid days today. He brought me home a gift:  a bottle of something with the brand name “Liquid Oxygen“. You might expect liquid oxygen would be cold. This isn’t cold. And mostly, it’s not oxygen. According to the manufacturer, it’s basically water with a pinch of salt.  And it’s expensive. I think they should change the name and call it ‘Liquid Oxygen for Dummies’, but maybe someone else owns that trademark.