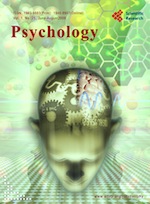 We have discovered what may be the world’s strangest collection of academic journals. Published by a shadowy entity, it suggests — at first glance, anyway — some kind of scam. But is there a scam, or not? If there is, what’s the point of it? If there’s not, same question. Maybe you can help us find the answers.

One journal is named Psychology. All its articles have been previously published elsewhere, some almost a decade ago — but nowhere is that mentioned. You can download the entire first issue. It contains four articles. Here are links to the originals of those articles, which are essentially identical to the versions in this new journal:

We learned about this from a Yale University chemist. He received an unsolicited email invitation to join the apparently-nonexistent editorial board. Trying and failing to find basic info about the journal, this chemist became intrigued — especially because he recognized that one of the reprinted articles, Dunning and Kruger‘s “Unskilled and Unaware…”, was honored with an Ig Nobel Prize, way back in the year 2000.

The publisher, Scientific Research Publishing, has other journals, as well. Some of them (Applied Mathematics, Journal of Modern Physics, Biosciences*, Journal of Cancer Therapy**, etc.) also appear to follow the “publish things that were already published, but don’t mention that” principle.

On the organization’s web site, we found barely any identifying or location information. The contact page says “Name: Scientific Research Publishing, Inc. USA” and lists an email address —  but we have not found any such corporation in the USA, and email sent to that address has produced no reply.  The web site is registered to an organization in Wuhan, China.

Scientific Research Publishing, also known as scirp.org, also organizes conferences. Discussions in the blogosphere [see this one, for example and for pointers to others], for whatever those are worth, suggest that some of those conferences, too, are full of mystery.

* This is an especially odd case. One of its articles (“Descriptively probabilistic relationship between mutated primary structure of von Hippel-Lindau protein and its clinical outcome,” by Shao-Min Yan and Guang Wu, in the November 2009 issue ) also appeared in one of the publisher’s other journals (Journal of Biomedical Science and Engineering, in the June 2009 issue).

**  Another odd case: An article called “Conformal Microwave Imaging for Breast Cancer Detection”, published in the September 2009 issue with no author listed, is virtually identical to an article published in the April 2003 issue of IEEE Transactions on Microwave Theory and Techniques with authorship credited to Li Dun Li, P.M. Meaney, and K.D. Paulsen.