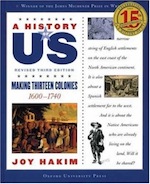 Fabulous stories – fabulous in one or another sense of that word – are the essence of a much-used American history textbook called Making Thirteen Colonies 1600-1740, written by Joy Hakim and published by Oxford University Press.

The stories enchant compactly. On page 9, the book says: “A long time ago – actually, it was almost 4,000 years ago – in the city of Ur, there lived a man named Abraham… Abraham will turn out to be important – to people all over the world – and to us in America.”

We’re never told how or why Abraham is important to American history. And we’re not told that he may be a mythical fellow. The book introduces Abraham and Moses and other biblical people in the same way that, a few pages later, it serves up George Washington.

BONUS (June 2011): Joy Hakim campaigns for better textbooks in The Washington Post, as guest writer in a column that a few months earlier had told about Hakim’s battle to get more facts into textbooks.

BONUS (June 2011): Donald Trump and other historic and/or historical persons had small starring roles in a TV version of “The History of US”, says the New York Times in a report called “History From Unexpected Characters“.

BONUS (June 2011): Joy Hakim clarifies (in an email discussion with us) how the unusual passages in her book came about: “I went to kids and teachers when I wrote my books. I paid 10-year-olds to be my editors. (That way I got their full attention.) I gave them copy and a code to put in the margins: B for boring, etc.  It was amazing what kids told me.  So some of the text that you seem to feel is weird or not up to college standards, works with young readers.”