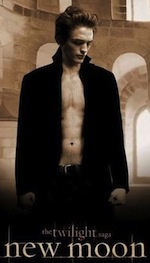 A CINEMA has banned fans from kissing the cardboard cutout of a film’s lead actor – because they might catch swine flu.

Teenage girls had been planting kisses on, or hugging, the cutout of Brit heartthrob Robert Pattinson – who plays Edward in The Twilight Saga: New Moon – at the Reel Cinema, in Crewe. But the fun is now over after a warning was slapped across Robert’s face. It reads: “Please help reduce the spread of germs by refraining from giving Edward, or any other character for that matter, a kiss or hug.”