Ten years ago, people quivered as the year 2000 approached. Let’s look back, perhaps fondly, at Project AIRhead 2000. Announced in June 1994 (click here to see the announcement), the project celebrated every item, project or concept that had the number 2000 tacked onto its name in giddy anticipation of the coming millennium. 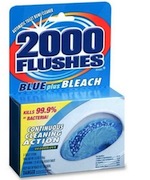 Between today and January 1, 2010, we will glimpse at some of the collection. How many of these things survived a full decade past Jan 1, 2000? You might enjoy doing some detective work to find out. (If you find anything especially interesting, please let us know!)