Project Grizzly, the splendid National Film Board of Canada documentary about Ig Nobel Prize winner Troy Hurtubise, can now be watched online in its entirety. Troy was awarded the 1998 Ig Nobel Prize in safety engineering for developing, and personally testing a suit of armor that is impervious to grizzly bears. To watch the film, click on the image.

Fun fact #1: Coming to the Ig Nobel Prize ceremony in 1998 (and again when he returned to show off his anti-grizzly-bear suit-of-armor in 1999) Troy had adventures getting his suit through American customs. But he made it. See below for a photo of the 1998 ceremony.

Fun fact #2: Troy continued working on more advanced suits of armor, which led to many further adventures, none of which killed him. 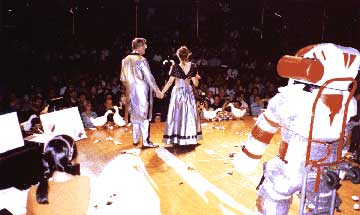