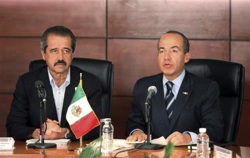 The newest Mexican tactic against the spread of swine flu — going necktie-less — is justified if the results of a 2000 British study are accurate. That study looked at the spread of infection within hospitals:

“Neck Ties as Vectors for Nosocomial Infection,” M. Dixon, Intensive Care Medicine, vol. 26, no. 2, February 2000, p. 250. (Thanks to Kurt Verkest for bringing this tour attention.) The author, at Addenbrooke’s Hospital, Cambridge, UK,  warns that: “The results suggest that neck ties should be considered a significant potential source of infection. Although this risk can be lessened by wearing plastic aprons when we come into contact with patients maybe we should do without neck ties altogether in critical care areas.”

Mexicans can start to relax a bit now that the country’s deadly flu virus appears to be under control. But the country’s health minister said on Sunday his countrymen shouldn’t loosen their neckties, they should take them off altogether.

Health Minister Jose Angel Cordova (pictured above with President Felipe Calderon last week; Calderon is the one wearing a tie) was visibly relieved by new data showing a decline in the number of people severely ill with the new H1N1 flu virus…. Citizens must continue to avoid physical contact, wash hands frequently and say goodbye to the tie, Cordova said.

(Thanks to investigator Estrella Burgos for bringing the Mexican necktie situation to our attention.)