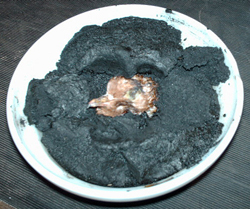 American poultry escaped from a disaster. Recently, agricultural specialists of the U.S. Customs and Border Protection at Baltimore-Washington International Airport discovered the head of a bird in the luggage of a passenger from Nigeria. The bird was sacrificed and the head “taken for a friend”. It was brought to the US, encrusted in homemade black soap. This concealment method was considered “most unusual” by CBP officials.

What is the identity of this ritually decapitated bird? The official picture shows a head of a pigeon, anyone can see that. But what species? West African pigeons are not my specialty, but thanks to the striking cinnamon-coloured feathers just one of the twenty-three likely candidates remains: a female western bronze-naped pigeon (Columba iriditorques). The fine specimen posed a potential threat to American poultry and was destroyed. It is unknown if the black soap made it through US-customs.

The use of arsenical soap to reliably preserve bird skins was one of the most significant advances in the development of ornithology.