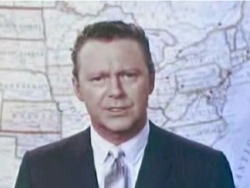 GEORGE PUTNAM (all caps, because that’s the way he said everything), Los Angeles Television/Radio Legend, has died at the age of 94….

Best known on the Web as the “outstanding
news reporter” who narrated the ’50s alarmist documentary “Perversion for Profit“, he was also acknowledged as the model for the Mary Tyler Moore show’s bombastic newsman character Ted Baxter (seen here sitting in on a real newscast).

So says a September 13, 2008 report on Metafilter. For historians, Wikipedia provides further info about the film.