Here are four reviews by audience members at the just-concluded 2009 Ig Nobel Tour of the UK. 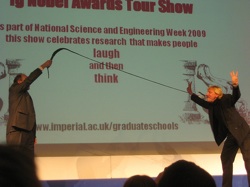 I attended the Ig Nobel roadshow at Imperial College last night, hosted by the awards’ straight-faced founder Marc Abrahams. Over two hours, ten prize-winners presented their improbable research to an audience of captivated grinagogs…. Best night out in ages. I can’t beat Anna Kushnir, who got to go to the actual ceremony in Boston last October, but these roadshows are the best free tickets in town.

I had a truly entertaining night after wandering along to the London leg of the Ig Nobel tour… As entertaining as the talks were, they were livened up by the timekeeper. Each talker is strictly limited to 5 minutes, and each minute a bell is run – and when the five minutes is up, an 8-year old girl, known as Miss Sweetie Poos walks across the stage and declares “please stop now, I’m bored” and repeats this until the speaker finally gives up. 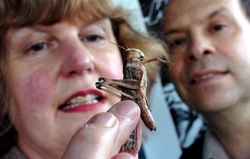 THE legal rights of plants, the ability of slime to solve puzzles and the necrophiliac tendencies of ducks were all in discussion at an eye-opening science event in the region this week…

And so for one glorious night all this was put to one side as arguably the most nerdy geekathon came to town. Improbable research, that merry band of Americans who award the annual Ig Nobel prize, brought their show to Imperial College London last night in a 150-minute tour de force of laughs, cringes and bewildered applause. The Improbable mission is to publish

Research that makes people LAUGH and then THINK.

And that’s what we got in bundles at the show. We laughed when Marie-Christine Cadiergues explained how and why she conducted research into how fleas found on dogs jump higher and further than fleas found on cats. And then were made to think about how this reflects on flea biology. We chuckled at Prof. David Sims‘ take on how people get angry – entitled You Bastard, this paper makes you think about indignation and rage. And we shifted uncomfortably in our seats and laughed too as Kees Moeliker recounted his experience of homosexual necrophilia in ducks (which won him arguably the most famous Ig Nobel prize in recent years in 2003), and thought about just how this practice appears not to be restricted to ducks but occurs in many species of bird. Oh, and for added effect, he brought said duck with him which he had stuffed and preserved as part of his job at the Rotterdam Natuaral history Museum.

There was more: a dissection of why the nickname of the sore throat that accompanies peritonsillitis, ‘hot potato voice’ (which apparently clinicians in the UK use all the time) – is a misnomer, because the vocal frequency changes in the illness do not resemble those when you have a hot potato in your mouth. More potato-based action – an Oxford psychologist who showed that when eating crisps, the crispier the crisp sounds, the crisper the eater will rate it as. And a study of “scrotal asymmetry.” Enough said.