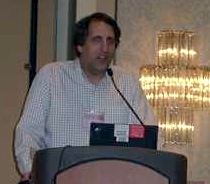 In 2003, an independent scholar from New Jersey began submitting limericks for a competition in mini-AIR, the monthly online supplement to my magazine, Annals of Improbable Research. The contest challenges readers to read an off-putting scholarly citation, and explain it in limerick form. Martin Eiger so consistently won that we eventually banned him as an unfair competitor, gave him the title Limerick laureate, and now publish him every month. He handles a huge range of subject matter.

If you’re hoping to hash out a thesis,
And stuck for a topic: emesis,
As triggered in ferrets
Undoubtedly merits
Much more than a mere exegesis