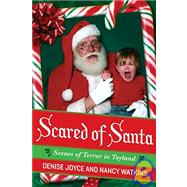 The kids-are-scared-of-shopping-mall-Santas studies written by 2003 Ig Nobel Literature Prize winner (for publishing nearly 100 academic studies about things that annoy him) John Trinkaus have inspired, directly or indirectly, a new book of photographs called “Scared of Santa: Scenes of Terror in Toyland” by Denise Joyce and Nancy Watkins.

Professor Trinkaus’s Santa research includes four studies published in previous years, and a new one that will be appearing soon. The past studies are:

Visiting Santa: another look, John Trinkaus, Psychological Reports, 2005 Jun;96(3 Pt 2):1022-4. “An informal enquiry of the facial expressions of children as they queued up to meet Santa Claus during the 2003 Yuletide season showed that about 82% of the 300 children appeared to be indifferent to seeing Santa. As this finding seemed perhaps different from what conventional wisdom would suggest, that most children would be exhilarated or happy to visit with Santa, this study was replicated in 2004.”

Visiting Santa: a further look,  John Trinkaus, Psychological Reports, 2006 Dec;99(3):993-6. “An informal enquiry of the facial expressions of children as they queued up to meet Santa Claus during the 2003 Yuletide season showed that about 8 out of 10 children appeared to be indifferent to seeing Santa. This replication of the study in 2004 resulted in an approximately similar finding. A repeat of these enquiries, in 2005, suggested that the indifference rate appeared to lessen (being somewhat more cheerful) the closer was Christmas.”

Visiting Santa: an additional look, John Trinkaus, Psychological Reports, 2007 Dec;101(3 Pt 1):779-83. “Two informal enquiries of the emotions of 600 children queued up to meet Santa Claus in shopping malls during the 2003 and 2004 Yuletide seasons suggested that about 80% appeared to be indifferent to seeing Santa. Emotions were estimated using a standard scale of facial expressions. A replication of these studies in 2005 observing another 200 children indicated that this rate declined (to about 60%) the closer was Christmas day. To investigate in more detail the feelings of the guardians accompanying indifferent children, this study was conducted in 2006. Of the total of 300 guardians (who were accompanying 300 children) 87% appeared to be happy. They were escorting 91% of the 200 children who seemed to be indifferent.”

Trinkaus is a professor emeritus at the Zicklin School of Business in New York City. He is, we are please to report, happily conducting further research on this and other subjects.

BONUS: “Learning from the things that annoy us“