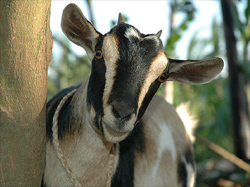 Yes, I am a goat-giver, and proud of it.

I’ve noticed in business writing in particular the frequency of what we can call the Fallacy of Examples (a type of Fallacy of Hasty Generalization). You read some story about a successful CEO as if we should learn from his (yes, usually it’s a him) example. But we are struck by examples frequently because they’re exceptional. As exceptions, examples are the last thing you want to learn from.

Not always, though. Sometimes examples are typical. That’s different. The trick is determining which are which.

An even when you can, you’re still not done. Is Beatrice and her goat an exception? Yes. That’s why her story is so inspiring. As an exception, it may be exactly what we should not be emulating. After all, if she’d won the lottery, we wouldn’t think that giving lottery tickets to the poor is a sensible approach to the problem of world poverty. But, even though Beatrice is an exception, the typical effect of donated goats (and other such small-ish gifts) may be quite good.

That’s why the Fallacy of Examples is a fallacy. Reasoning from examples doesn’t always lead to false conclusions. The reasoning just isn’t enough to tell you what the valid conclusions are.