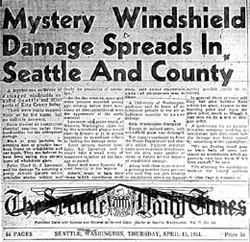 On April 15, 1954, Bellingham, Seattle and other Washington communities are in the grip of a strange phenomenon — tiny holes, pits, and dings have seemingly appeared in the windshields of cars at an unprecedented rate. Initially thought to be the work of vandals, the pitting rate grows so quickly that panicked residents soon suspect everything from cosmic rays to sand-flea eggs to fallout from H-bomb tests. By the next day, pleas are sent to government officials asking for help in solving what would become known as the Seattle Windshield Pitting Epidemic….

Nevertheless, conventional wisdom lay with the scientists. Further investigation by the City of Seattle Police Department showed that most dings pitted older car windshields. In cases where auto lots were involved, brand new cars were unpitted, whereas used older cars showed signs of pitting. Police found rare instances of “copycat” vandalism, but most of the cases had a simple explanation: The pits had been there all along, but no one had noticed them until now.

(Thanks to investigator Jules Reynolds for bringing this to our attention.)