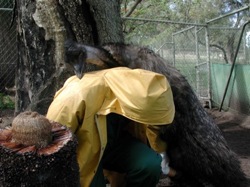 Dr Irek Malecki, co-supervisor of the project, said the technique, which involved using a dummy female for collecting ostrich ejaculates, evolved out of animal behaviour observations, where captive reared birds become imprinted and perceived humans as ?sexy? and worthy of their sexual display.

Researchers in the School of Animal Biology at The University of Western Australia (UWA) have achieved a world-first by developing animal and human-friendly methods for semen collection and artificial insemination in ostriches. [The photo shows Dr? Malecki “collecting semen from
a male emu, who is much gentler than a male ostrich,?using an artificial cloaca.”]

The research builds, directly or indirectly on the Ig Nobel Prize winning study “Courtship Behaviour of Ostriches Towards Humans Under Farming Conditions in Britain.” Charles Paxton, co-author of that study, will discuss it and its implications as part of the Ig Nobel Cabaret at the Cheltenham Science Festival on Friday night, June 7.

(Thanks to investigator Nicole Bordes for bringing this to our attention.)