While the U.S. Presidential caucuses and primaries march on, a more subtle race among the candidates persists, the race for the reading attentions of the voting masses. For a mere $250 investment at the publisher’s suggested retail price, it is possible to purchase 13 books by 11 Republican and Democratic hopefuls (yes, several wrote more than one).

As I was trying to make sense of this dizzying array of reading choices in front of me this election season, I must admit that my eyes glazed over with familiar talk of audacious hope, living history, prayer, courage, higher ground, and leadership. So I did the only thing I could do: I boiled it all down to a few objective numbers. It turns out that these books collectively take up over 4,400 pages, and are priced at more than a nickel a page. But, as shown in the graph, the range in price per page across the candidates’ offerings is truly staggering. Here’s the graph: 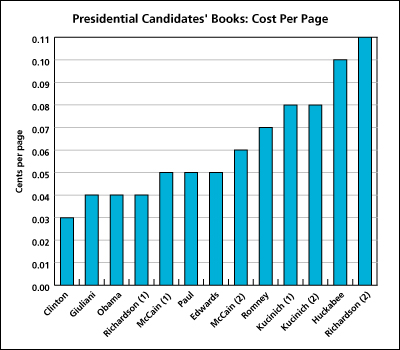 It is no surprise that Senator Hillary Clinton is on the far left — along with Mayor Rudy Giuliani and Senator Barack Obama — at under 4 cents per page, while Senator John McCain and Governor Mitt Romney are more centrist at 6-7 cents per page. In contrast, Governors Mike Huckabee and Bill Richardson are the farthest to the right, at over 10 cents per page. Of course, the latter could be accused of flip-flopping; he has taken different positions on this particular issue, as his other book is priced towards the other end of the economic spectrum.

On the one hand, if price signals quality, a Huckabee versus Richardson election campaign may be in our future, as these candidates must have the most highly prized messages. On the other hand, Clinton and Giuliani may have priced their respective tomes in such a way as to garner more populist appeal, especially in less well-to-do parts of the country, where affordability of Presidential biographies is a pressing issue.

A little arithmetic sheds light on the critical choices we face as a nation. The difference between the most expensive candidate offering and the least on a per page basis is a little less than 8 cents. Assuming this is a harbinger of things to come in their respective Presidencies, it implies that for every billion pages of government publications, at stake may be as much as $80 million in differential costs to the taxpayer. When you realize just how many billions of pages of hearings, committees, codes, regulations, opinions, proposals, plans, and conferences are published by the US Government each year, you realize just how important the choice of President really is.