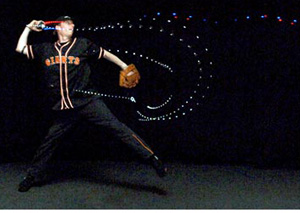 We chose Martin to participate because he was the closest we could find to Absolute Zero in terms of pitching ability. He made no pretense of skill. He held the baseball as if it were radioactive.

“You don’t get these things in Europe,” he said. “I wouldn’t know where to get one.”

Martin even insisted on dropping the baseball to the floor during one idle moment, just so he could kick it around like a soccer midfielder. “That’s what you’re supposed to do with a ball,” he said.

His first attempts at American-style pitching were predictably pathetic.

“He throws like a European,” Shore said, keeping score on the sidelines. “No lower body.”

Snyder’s “before” shots documented Martin’s awkward motions as the blinking lights on the ball traced a remarkably slow path.

“He’s invented a new pitch — the German change-up,” Barker said. “The ball never gets there. You can’t hit a pitch that never arrives.”

(Thanks to investigator Mark Schreiber for bringing this to our attention.)