“It is a nice prize, the highest form of recognition you can get in tropical medicine in the Netherlands.” 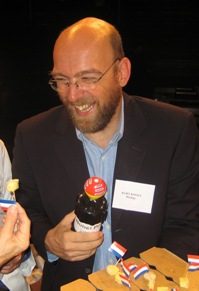 Medical entomologist Bart Knols sounded excited, and he had good reason. Yesterday, he and his colleague Willem Takken of Wageningen University were awarded the Eijkman Medal 2007 for their combined 20 years of research into insects that transfer tropical infectious diseases, like malaria. According to the press release issued by the Royal [Dutch] Tropical Institute, ‘especially their work on the attraction of the African malaria mosquito to the smell of human feet and Limburger cheese was groundbreaking’.

Less than a year ago, in October 2006, the very same research brought Bart Knols and another colleague, Ruurd de Jong, an international, yet different kind of recognition: the 2006 Ig Nobel biology prize — for showing that the female malaria mosquito Anopheles gambiae is attracted equally to the smell of limburger cheese and to the smell of human feet.

The Eijkman Medal, awarded 45 times since 1927, is named in honour of Christiaan Eijkman, professor of vitamin-studies and recipient of the 1929 Nobel Prize in the field of Medicine and/or Physiology.

Congratulations to the board of the Eijkman Medal Fund, to Willem Takken and to Ig Nobel prize winner Bart Knols.