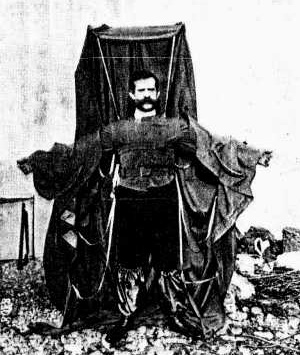 Many of man’s early attempts to conquer the sky ended in tragedy. So did the experiment of the Austrian tailor Franz Reichelt, one of the the last of the birdmen. He combined his urge to fly and his workmanship in a garment to serve as both an overcoat and a parachute. In 1911 he decided to test his invention and jumped from the first observation platform of the Eiffel Tower. His suit failed and the brave flyer plumeted some 60 meters to his death. He expected onlookers would measure the duration of his flight. Instead they measured the depth of his crater.

His fatal drop was documented by a short silent movie and a remarkable photograph in the the April 1912 issue of ‘Popular Mechanics‘, but sadly no measurements were given. Franz Reichelt’s final flight took about five seconds.

(Thanks to investigators Sander Blom and Mels van Zutphen for bringing the movie to my attention.)