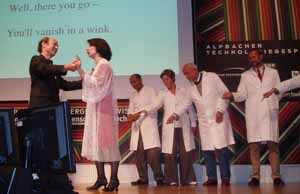 Ah 1999?the summer my husband Frank Wilczek almost blew up the universe, as recently dredged up by the latest New Yorker.

So writes Elizabeth Kolbert in the May 14, 2007 issue of the New Yorker.

Frank Wilczek has since remedied that na?vete by viewing the world from the point of view of an oxygen atom.