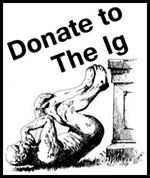 *Pre-ceremony concert —and the webcast —begin at 5:40 pm (US Eastern Time)
The ceremony proper begins at 6:00 pm

All speeches will be kept delightfully brief, enforcved by eight-year-old Miss Sweetie Poo.

Winners travel to the ceremony, at their own expense, from around the world to receive their prize from a group of genuine, genuinely bemused Nobel Laureates, in Harvard’s historic and largest theater. Additional info will appear in the Improbable Research blog.

WEBCAST: Immediately below, please find and enjoy the webcast of the ceremony.

LIVE TWEETING: A keen official observer will live-tweet the ceremony, as will many of the audience members in Sanders Theatre:

Groups of five (5) or more persons attending the Ig Nobel prize ceremony can be officially recognized during the ceremony as Official Delegations. If you would like your group recognized in this way, first obtain tickets, then register with Louise Sacco, Official Overseer of the Delegations (phone: 781-690-6621, email: LouiseSacco AT gmail.com). The deadline for registering as a delegation is a week before the ceremony.

Download your very own PDF copies of the 2016 Ceremony’s Spiffy Poster, identical to the ones we print for the ceremony.

We announce our biggest supporters on stage during the internationally broadcast prize ceremony. All supporters are thanked here on the website and/or in the IgBill (program).  Past supporters include corporations, laboratories, and local business.
Contact us to discuss becoming a supporter of the Ig Nobel Prize Ceremony.

This 26th First Annual Ig Nobel Prize Ceremony will include many improbable things:


The ceremony also celebrates the publication of two books: This Is Improbable Too, and The Ig Nobel Cookbook (volume 1)


** Time limits will be enforced by the the referee, Mr. John Barrett

Who’s Who: [coming soon] Click on the photo array to see many of the ceremony organizers and participants

WHERE: If you are walking, driving, T-ing, biking, or running to Sanders Theatre, you may want some directions. Here are: (1) a map and directions; and (2) the secret of how to pahk your cah near Hahvud Yahd.

WHAT TO WEAR: We suggest you wear clothing. Clothing that is, like you, colorful. People like yourself (or in some cases, very unlike yourself) in distant places, watching the broadcast and seeing occasional glimpses of the Sanders Theatre audience, will thrill to the panoply of colors, styles, and improbable accoutrements. This is the night to unearth your old wedding gown, uniform, suit of armor, labcoat or longjohns.

Here’s video of the lecture by the 2016 Ig Nobel Peace Prize winners: