Thanks to everyone who watched, attended, threw paper planes, or whatever.

This video shows the entire 2019 ceremony. (If you want to also see the little pre-ceremony Youth Exhibition, scroll down the page a bit, and watch that slightly longer video instead.) 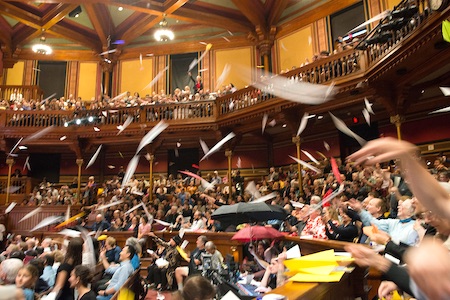 Winners traveled to the ceremony, at their own expense, from around the world. Each received their prize from a group of genuine, genuinely bemused Nobel Laureates, in Harvard’s historic and largest theater.

The deadline to register as a delegation is September 4th, 2019.  If you would like your group of five (5) or more ceremony attendees to be recognized as an Official Delegation, First obtain tickets, Then register with Louise Sacco, Official Overseer of the Delegations (phone: 781-690-6621, email: LouiseSacco AT gmail.com).

(Historical note: We’ve been webcasting the Ig Nobel ceremony every year since 1995!)

WEBCAST: This video shows the entire LIVE WEBCAST that included: (1) a pre-ceremony Youth Exhibition called “15 habits in 15 minutes: (2) the thrilling two-minute droning recitation of safety regulations in Sanders Theatre; and then (3) the entire Ig Nobel Prize ceremony itself.

Download your very own PDF copies of the 2019 Ceremony’s spiffy poster, and bookmark, and IgBill, identical to the ones we print for the ceremony.

Contact us to discuss becoming a financial supporter of the Ig Nobel Prize Ceremony.

The ceremony still celebrates the publication of two books: This Is Improbable Too, and The Ig Nobel Cookbook (volume 1)

** Time limits were enforced by the the NSFW (Not Safe for Work) Indicator, and by Miss Conduct.

Who’s Who: Click on this photo array to see many of the ceremony organizers and participants

Lectures Webcast—The lectures was webcast live, here on this page (on Saturday Sept 14th). Now you can watch recorded video of that entire event: