A new invention aims to foil paparazzi who try to photograph people who do not wish to be photographed. Wilbert Leon Smith, Jr. and Keelo Lamance Jackson of California obtained a patent last year for what they call “Inhibiting Unwanted Photography and Video Recording”. Their invention builds on a simple idea patented in 2005 by Jeremy and Joseph Caulfield from Arizona.

The Caulfields equipped celebs with a flashgun that fires automatically the instant another flashgun fires nearby. Smith and Jackson’s device goes that bit better: it’s a rotating, swivelling, oscillating device that can emit multiple strobe lights and other light beams for as long as the celebrity deems necessary.

The device has uses beyond deterring pesky paparazzi. As Smith and Jackson explain, it can also protect our own spy agencies against nosy foreign bad guys…

Here’s a technical drawing from the Smith/Jackson patent: 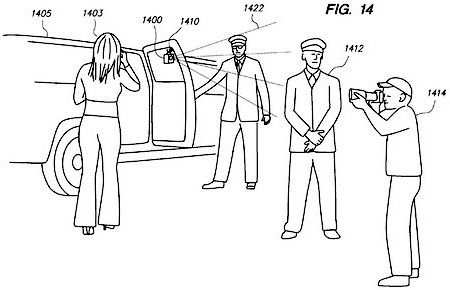 BONUS: Martin Gardiner’s report on this.