Some brain scientists use their brains to explain how they think other people’s brains are used. They also use (in addition to their brains) fMRI [functional magnetic resonance imaging], a technique in which complex equipment measures some of the things that happen inside a brain while a person is using that brain. (NOTE: the technique has also proved illuminating when used on dead salmon or other biological entities.) Two new studies center on childish thinking:

“Neural Activity during Natural Viewing of Sesame Street Statistically Predicts Test Scores in Early Childhood,” Jessica F. Cantlon and Rosa Li, PLoS Biol, 11(1), January 3, e1001463.  (Thanks to investigator Laura Emmons for bringing this to our attention.) The authors, at the University of Rochester, New York, explain:

“This more ecologically natural paradigm, combined with the novel measure of ‘neural maturity,’ provides a new method for studying real-world mathematics development in the brain.”

“Expert individuation of objects increases activation in the fusiform face area of children,” Thomas W. James and Karin Harman James, NeuroImage, vol. 67, February 15 2013, pp. 182–192. (Thanks to investigator Neil Martin for bringing this to our attention.) The authors, at Indiana University, explain:

“Here, two groups of school-aged children — one group with an EII with Pokémon cards and another group of age-matched controls — underwent fMRI while viewing faces, Pokémon characters, Pokémon objects, and Digimon characters.”

Here, below, is some detail from that second study: 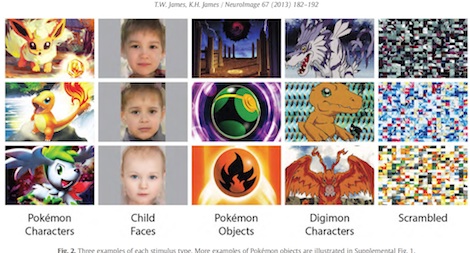