Game theorists, some of whom are mathematicians, some economists, have enjoyed wrestling with the problem known as “The Prisoner’s Dilemma.” (Wrestling with that problem has even figured in the awarding of several Nobel Prizes in the field of economics.) Now researchers in Germany have seen what happens when some real prisoners are faced with The Prisoner’s Dilemma. They tell all, or at least some of what happened, in their study: 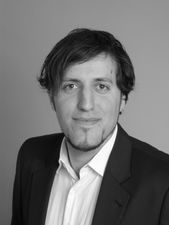 “Prisoners and Their Dilemma,” Menusch Khadjavi [pictured here] and Andreas Lange, Journal of Economic Behavior and Organization, vol. 92, August 2013, pp. 163–175. (Thanks to Hiroshi Gunji for bringing this to our attention.) The authors, at the University of Hamburg, Germany, report:

“We report insights into the behavior of prisoners in dilemma situations that so famously carry their name. We compare female inmates and students in a simultaneous and a sequential Prisoner’s Dilemma. In the simultaneous Prisoner’s Dilemma, the cooperation rate among inmates exceeds the rate of cooperating students. Relative to the simultaneous dilemma, cooperation among first-movers in the sequential Prisoner’s Dilemma increases for students, but not for inmates. Students and inmates behave identically as second movers. Hence, we find a similar and significant fraction of inmates and students to hold social preferences….

“The five sessions with prisoners were conducted at JVA für Frauen (penitentiary for women) in Vechta, Germany, on June, 14 2012.6 It is the central women’s prison in the German state of Lower Saxony (in North-Western Germany, bordering the City of Hamburg) with a capacity for about 150 detained women in its main section…. 90 female inmates participated in our lab-in-the-field sessions, while 92 female students participated in our conventional lab sessions, yielding a total of 182 subjects.”

BONUS (probably not related): The Batman Theme, produced with sounds from real bats