A core definition of Britishness, the official six-page specification for how to make a cup of tea, is officially “under review”. But don’t panic. It is standard procedure for the British Standards Institution (BSI) to do a “systematic periodic review” of each of its many specifications which, piecemeal, define nearly everything British. 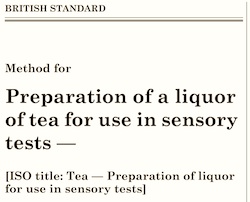 Belying stereotypes of peremptory rigidity in anyone or anything that officially tells the populace what’s what, the BSI is nice about what it does. “British Standards are voluntary in that there is no obligation to apply them or comply with them,” it says. The standards are “devised for the convenience of those who wish to use them”. That sentiment appears in the 44-page specification for standard number BS 0, “the standard that governs the way BSI produces standards”, copies of which are available free of charge.

The cup-of-tea standard, officially numbered BS 6008, has been unchanged since 1980. It does come at a cost: £82 per copy, more than triple the £24 price, in effect, when I profiled it eight years ago….

BONUS: A salute to Smoot.