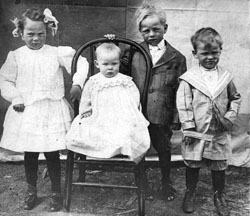 Can anyone help me identify the disgruntled children in this photograph? This is a science puzzle, and I want to know the answer. My professor when I was living in the United States gave me this as a sort of humorous scientific historical gift. He was that kind of professor. It came with a set of clues. He said that three (3) of the children grew up to be famous scientists, one (1) grew up to be a famous international financier and criminal, two (2) are female, two (2) are male, one (1) famously loathed wearing shoes, two (2) were involved with theories about quarks, all (4) excelled at mathematics, and one was involved in a famous quarrel in Paris.

I don’t know who any of them are, or even how to start finding out. That is why I am asking you. It looks to me that at least one of the children is in distress and has to evacuate its bowels soon.