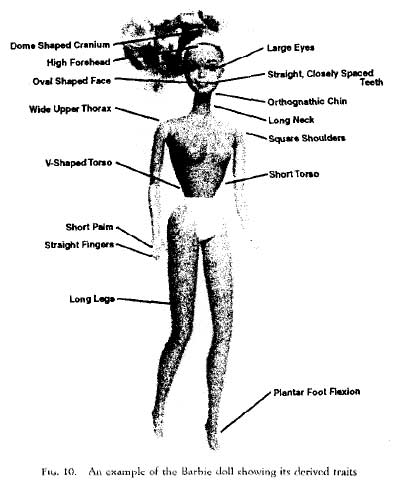 Academics have been examining Barbie® for more than a decade now. One of the first to do so was senior professor Albert Magro of Fairmont State University, who, in 1997 presented his paper ‘Why Barbie is perceived as beautiful.’ (Perceptual and Motor Skills, 85, 363-374) His experimental examination of evaluations involving 495 individuals came to the conclusion that Barbie® had the following attributes –
A dome shaped cranium, high forehead, large eyes, an oval shaped face, straight closely spaced teeth, an orthognathic chin, a long neck, a wide upper thorax, square shoulders, a v-shaped short torso, short palms, straight fingers, long legs and plantar foot flexion.

Leading to the observation that : “The Barbie doll is illustrative of how human beauty has evolved and indicates elements of human form that appear beautiful.”

Since then, Barbie® has featured in several other scholarly studies …  one of the latest in the form of a thesis from Alessandra Gaudio at Fordham University. Beauty and the Barbie Doll: When Life Imitates Plastic (2011) (American Studies Senior Theses. Paper 5.) The conclusion of which hints at the as-yet-not-fully-resolved nature of Barbie-based studies, and perhaps, by implication, at opportunities for further academic explorations. “Modern women find themselves needing to fit into a myriad of different molds, just as Barbie has over the years, resulting in a need to negotiate the superficial and substantive aspects of their character in order to successfully adapt to each new niche. Unfortunately my project cannot come to any definite conclusions about a resolution to this ongoing battle that women have been fighting with the Barbie.”

1. Professor Magro’s paper is scanned and provided courtesy of professor Justine Cassell, (Director of the Human-Computer Interaction Institute, in the School of Computer Science at Carnegie Mellon University.)