Two subjects we’ve written about will come together in London on November 30.

John Troyer, the man behind this (The Ghoulish State of Necrophilia Law) and this (Corpse case arises anew, again) will talk at a showing of the documentary film about this (The First Lady of Miniature CSI). It will happen at a venue called The Horse Hospital:

Feature-length documentary film, Of Dolls and Murder, narrated by iconic filmmaker John Waters, exposes an unimaginable world of miniature homicides. Lurking inside this surreal collection of dollhouse dioramas thrives a criminal element that is all too real. These “Nutshell Studies of Unexplained Death” reveal a dystopic rather than an idealized version of domestic life. Created as a teaching tool by an unlikely grandmother Frances Glessner Lee, the Nutshells are home to violent murder, prostitution, mental illness, adultery and alcoholism…. From CSI and real-life detectives, to criminally minded college students and a visit to “The Body Farm,” Of Dolls and Murder illuminates the tiny world of big time murder.

The screening will be followed by a Q&A with Dr John Troyer, Deputy Director, Death and Dying Practices Associate, Centre for Death and Society, University of Bath, who features in the film. 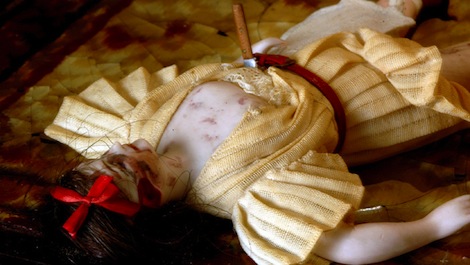