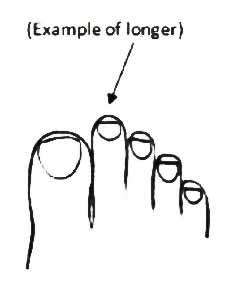 A growing body of scientific studies have examined the implications of finger-length ratios, But until recently up to 50% of humanoid distal appendages may have been largely overlooked – for what of toe-length ratios? Progress towards rectifying this digital imbalance has been made with a recent study from the Department of Psychology, Penn State University, Harrisburg, US. Professor Marissa Harrison has published one of the very few studies to investigate the relationship between second toe length and androgen linked behaviours.
The toes of 107 college students were (self)-examined. The participants filled in questionnaires regarding not only the length of their second toes (as compared to their other eight) but also provided details of their (self)-perceived competitiveness, sociosexual orientation, and other traits. Results showed that a longer second toe was related to :
● Left-handedness (for both males and females)
● Competitiveness (females only)
● Exercise frequency (males only)

● Second toe length had no links, however, to sociosexual orientation (either in males nor females)

The author summarises the current findings and the prospects for further research thus:

“In conclusion, this study revealed connections between second toe length and androgenized behaviors/traits for women more so than for men. The results of this self report-based pilot investigation do suggest that there is a phenomenon of interest here for future, technologically-sound measures to elucidate.”