There are several possible causes of keratitis – and a new one has recently been identified and described in the literature – with the publication of  ‘Long Eyebrow Hair as a Possible Cause of Chronic Keratitis of Obscure Etiology’ in the specialist journal Cornea. 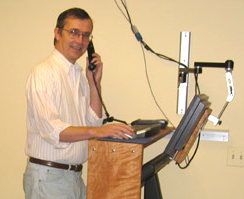 Dr. John Daugirdas (MD, author and inventor of the Nephronaut treadmill workstation – see photo) describes how an unusual case of corneal inflammation was completely cured by a simple and yet highly effective procedure – based around  eyebrow-trimming.
The article caused some controversy however, as a follow up comment from Dr. Weekitt Kittisupamongkol of the Hua Chiew Hospital, Bangkok, points out in the Feb 2010 issue of the same journal. The case could have perhaps have been pursued in an experimental mode if only one eyebrow had been trimmed. “If both sides were done, there is no control side to compare the effect of the length of eyebrow hairs on chronic keratitis.”
But could such a half-cure procedure really have been carried out without raising concerns about overstepping medical-ethical boundaries? Either way, as Dr. Daugirdas says in his reply – “This was a case report and not a randomized, controlled trial.”
Clearly there is still room for more research work on eyebrow-overhang induced keratitis (E-OIK), but at least a start has been made.