This photo, from the Associated Press, shows Public Health Prize winner Elena Bodnar demonstrating her invention — a brassiere that, in an emergency, can be quickly converted into a pair of face masks, one for the brassiere wearer and one to be given to some needy bystander. Nobel laureates Wolfgang Ketterle (center), Orhan Pamuk (right), and Paul Krugman (not visible in this photo) assist in the demonstration. [To see a more extensive view of the demonstration as it unfolded several seconds later, see the Ig winners page.] 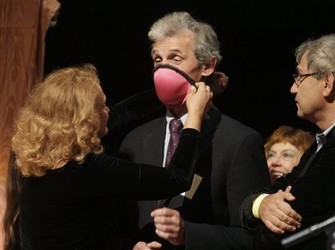