Alcohol/drug researchers report yet another unexpected discovery. A July 14, 2008 UPI article translates for the public:

The Harvard School of Public Health College Alcohol Study — a landmark study that surveyed more than 50,000 students at 120 colleges from 1993 to 2001 — found heavy drinking behavior of students was more common in college environments that have a strong drinking culture. 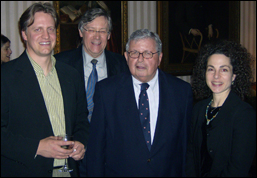 The study itself is

“What We Have Learned From the Harvard School of Public Health College Alcohol Study: Focusing Attention on College Student Alcohol Consumption and the Environmental Conditions That Promote It,” Henry Wechsler, Toben F Nelson, Journal of Studies on Alcohol and Drugs, July 2008: vol. 69, no. 4, pp. 481-90.

The lead author, Henry Wechsler, having alerted the public, then formally retired.