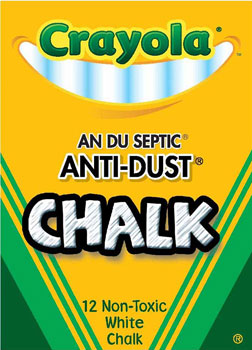 I have a complaint and no where to send it – so naturally I am sending it to you.

Crayola has made their chalk thinner. It is not much thinner. But it is thinner enough.

It is also shorter. I went back to my office and found an old box with two pieces of chalk. The new pieces are thinner, shorter and don’t write as dark. It is annoying. I was in the middle of a lecture and picked up a new piece of chalk. The quality of my teaching immediately went down. I am not joking. It was all I could do to not break down crying. I tried all the pieces in the new box. They were no good.

I want my old chalk back!

UPDATE: Investigator Robert Blanton writes: “One point I wonder is whether the new package contains more pieces of lesser quality. This seems to me to have been a trend in many products over the last years. You get less disguised as more.”

*CLARIFICATION: The professor clarifies his original comment: “Of course ‘An du septic’ is not actually French?it’s just nonsense. What I meant is: someone at Crayola invented a phrase that’s supposed to sound impressively foreign.”