Walter H. G. Lewin, 71, a physics professor, has long had a cult following at M.I.T. And he has now emerged as an international Internet guru, thanks to the global classroom the institute created to spread knowledge through cyberspace. 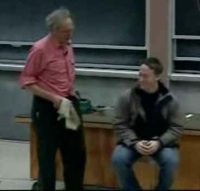 So says a December 19, 2007 New York Times profile. The Times does not mention one of Professor Lewin’s most unusual accomplishments. At the 2001 Ig Nobel Prize Ceremony, Professor Lewin accepted custody of the Ig Nobel Astrophysics Prize on behalf of the winners, televangelists Jack and Rexella Van Impe. The Van Impes (who said they could not attend the ceremony because they had “a previously scheduled fund-raiser”) won the prize for their discovery that black holes fulfill all the technical requirements to be the location of Hell. Paying tribute to the Van Impes, Professor Lewin said:

I accept this prestigious prize on behalf of Jack and Rexella Van Impe for their breakthrough contributions to astrophysics by making the intriguing connection between black holes and Hell.

Now, I do real research in black holes. A black hole is one of the most bizarre, exciting, fascinating, enigmatic and mind-boggling objects in our entire universe. Black holes are unimaginable. They go beyond our wildest expectations, fantasies and dreams. As a scientist, you can’t wish for more. Black holes are heaven for us.

However, we were recently straightened out by Jack and Rexella, who have shown that black holes fulfill all the requirements of Hell. As a result of their incredible insights, we now have to rethink our ideas about black holes — and I, for one, will be much more careful than ever about getting too close to the inner workings of black holes; and maybe my soul will be spared after all.

I can put this in seven words: Black holes are wonderful, but stay away.

NOTE: Click on the photo to see an unrelated incident — Professor Lewin beating a student named Simon, with cat fur.