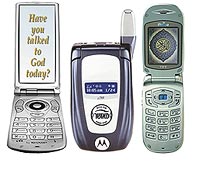 “Choosing a religious phone is one way a person who gives high salience to his or her religious identity can assert that importance in a public way,” says William Swatos, the executive director of the Religious Research Association in Galva, Ill.

(Thanks to Jason Ybarra for bringing this to our attention.)